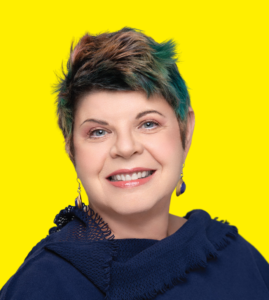 In 2008, after Elise Krentzel returned from living in Europe for 20 years she formed ek public relations. It is the culmination of her career adventures and amazing life experiences in 5 countries on 3 continents.  She’s courageously pioneered and bootstrapped,  successful media and marketing enterprises over the course of her 35+ year career.  Starting as a music journalist, she toured with KISS in Japan, then spent the next five years operating the first foreign-owned music talent & booking agency in Tokyo. She was Billboard Magazine’s Tokyo Bureau Chief and the first foreign DJ on FM Tokyo.

She launched the first privately held interactive digital travel guide publishing house in Europe that offered GPS in the early 90s pre-internet, and a non-profit AIDS organization in South Africa servicing youth through music video PSA’s. Ever the adventuress, she’s devoted to helping others achieve success by gaining an original edge in new and existing markets, in any country.

Elise makes the possible probable through her comprehensive no-nonsense direct communication strategies. She leverages startups and brands through a strategic big picture and transforms market share through innovative communication approaches that positively impact the bottom line. She’s authored two books and loves public speaking. She’s listed in Who’s Who in America, and Who’s Who in the East.

Elise loves discovery in all forms: art, travel, the pursuit of knowledge, new technology that transforms the way we communicate, live, and work, and most of all her son, who will graduate from college in 2023.

We are Communication Architects

We’re like architects. On the first floor, we spot opportunities others miss by developing a sound strategic marketing plan. The 2nd floor leads to implementing operational + GTM concepts with just enough of a rebel spirit to stay ahead of the curve. The roof consists of external outreach including promotional concepts, PR, and other methods of attraction.

We get to the root of what your persona is, then develop aspirational stories and events linked to your brand. Brand = mission + vision + messages. Ek public relations’ Go-to-Market communication strategies enable our clients to achieve their short and long term future goals.

We build ongoing relationships with customers, end-users, and key stakeholders, which leads to interactive dialogues. That leads to trust, which leads to listening. Listening leads to increased ROI. When you listen to your key customers and deliver compelling visual and written content that can be shaped into modern memories, you have a winning public relations strategy. We listen to our customers to deliver laser-focused PR to the media.

Based in Austin, Texas with a New York City sensibility for making magic happen out of thin air, ek public relations culls from a pool of talented associates around the world in the fields of editorial, design, audio/visual, media, web development and everything in between.

ek public relations transforms vision into innovation. We find new ways to gain market share for our clients’ and inspire others to monetize this innovation.

If you’re seeking an innovative approach to communicate your brand

we’d love to get to know you.